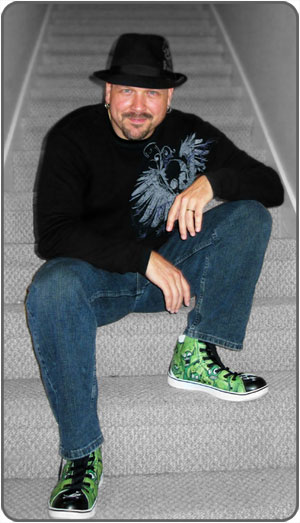 Sean Macdonald has been a fan of role-playing and Dungeons & Dragons since he was twelve. Growing up in Miami role-playing played a huge part in keeping him out of trouble and giving him something to do with his friends. Almost three decades later he is still hanging out with the same friends who continue to share the same interest.

He picked up his first DragonLance book in 1984 when Dragons of Autumn Twilight was released and, like so many others, he became an instant fan of the setting. He continued to collect those books and others including just about anything released from TSR and then Wizards of the Coast. Hundreds of novels from DragonLance, Forgotten Realms, Dark Sun, Ravenloft, Greyhawk, Mystra line the walls of his home.

In 1997 he created a little website dedicated to the "infamous" kender race from DragonLance known as the "Kencyclopedia". During this time he learned many skills of website design and how to use PhotoShop. He joined online groups of DragonLance fans in a number of online projects which furthered his love of the setting and increased his time learning new skills. Because of his site and his connections to other online fans he was asked to assist with developing the 3.5 rule set for the DragonLance Campaign Setting and then additional books after that.

In 2005 he attended GenCon for the first time and attended the Ennie Awards Show. When the category of Best Cartographer came up and they displayed " Temple Quarter: A City Quarters Sourcebook" by Christopher West, which won the Gold, Sean was excited. That map was beautiful. Sean decided he would try his hand at cartography and started providing maps for the DragonLance setting.

Ever since that time he has continued with a passion for this type of work expanding out to other settings and genres. Loving every dark corridor and far away land that he gets a chance to bring to life!